We encourage attendees who are at all levels of musical experience to drive the weekend by suggesting or leading workshops and by gathering for impromptu music sessions and conversations.  We also hire staff to share their expertise in specific traditional folk genres and the contexts of those song traditions, and to mingle and mentor.

Below are the folks we are delighted to have on board already! Check back here for updates as we finalize our staff - we are planning to have more staff than usual this year.

Alice Gerrard
Simply put, Alice Gerrard is a talent of legendary status. In a career spanning some 40 years, she has known, learned from, and performed with many of the old-time and bluegrass greats and has in turn earned worldwide respect for her own important contributions to the music.Alice is particularly known for her groundbreaking collaboration with Appalachian singer Hazel Dickens during the 1960s and ’70s. The duo produced four classic LPs (recently reissued by Rounder on CD) and influenced scores of young women singers — even The Judds acknowledge Hazel and Alice as an important early inspiration.
​
Alice’s two solo albums, Pieces of My Heart, and Calling Me Home were released on the Copper Creek label in 1995 and 2004, respectively, to critical acclaim in Billboard, Bluegrass Unlimited, New Country, and other publications. These superb recordings showcase Alice’s many talents: her compelling, eclectic songwriting; her powerful, hard-edged vocals; and her instrumental mastery on rhythm guitar, banjo, and old-time fiddle. A tireless advocate of traditional music, Alice has won numerous honors, including an International Bluegrass Music Association (IBMA) Distinguished Achievement Award, a Virginia Arts Commission Award, the North Carolina Folklore Society’s Tommy Jarrell Award, and an Indy Award.

Dr. Kathy Bullock
Dr. Kathy Bullock is a professor of music at Berea College, Berea, Kentucky who also provides workshops and other musical programs in African American sacred music throughout the United States, Europe, and Africa.  A performer, conductor, accompanist, arranger, and scholar, she specializes in gospel music, spirituals and classical music of the African diaspora, sharing the joy of this music-culture everywhere she goes. Dr. Bullock has worked for over twenty-eight years at Berea College teaching courses in Music Theory, African-American Music, Ethnomusicology, and General Studies. Additionally, Dr. Bullock has designed and led new and transformative international study programs in Ghana, Zimbabwe, and Jamaica.
​
Dr. Bullock’s research in African and African-American music and culture and the African diaspora has afforded her the opportunity to provide presentations including Singing in the Spirit, African-American Sacred Music and African-American and Appalachian Musical Connections.  She is a teacher/presenter at singing camps for organizations such as Village Harmony, Swannanoa and Common Ground on the Hill.  Other research projects include the compilation and completion of a new edition of art songs by contemporary African-American composers.

Dr. Bullock shares the infectious joy and inspires heartfelt connections as she sings, plays teaches and thus conveys the transcending power of love and of God through music. 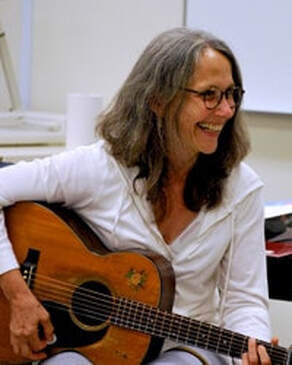 Val Mindel
Val Mindel is a longtime musician, teacher and workshop leader, known for bringing out the best in singers, whatever their level. Her specialty is the close, buzzy harmony that makes American old-time, bluegrass and country harmony so compelling. She has taught at numerous music camps – here in the U.S. at Augusta Vocal Week, Ashokan Southern Week, Voice Works, Allegheny Echoes and others and in the U.K. at Sore Fingers fall and spring camps.

​In addition to her solo work, Val teaches and performs in various combinations, including with California-based Any Old Time, with singer/multi-instrumentalist Joe Newberry and with daughter and old-time country musician Emily Miller and her husband Jesse Milnes (they have two CDs together: In the Valley and Close to Home), and has just published a book, So You Want to Sing Folk Music, part of the “So You Want To Sing” series for Rowman & Littlefield and the National Association of Teachers of Singing. Val teaches classes across the country and abroad as well as regular workshops at Brooklyn’s growing old-time music school, Jalopy. She lives in Elkins, West Virginia.

Nancy Kerr
Nancy Kerr is a UK-based fiddlesinger and songwriter who is known for her work with the Melrose Quartet as well as singing with her husband James Fagan, Eliza Carthy, and the Sweet Visitor Band.

Nancy is a respected interpreter of traditional material who has been compared to William Blake for her reawakening of a radical folk mythology as a backdrop for contemporary narratives about love and conflict, motherhood, migration, hardship and jubilation, and the tensions between rural and urban life. Her catchy yet ethereal songs have caught the ears and hearts of singing communities across the English-speaking world.

Nancy’s 2016 album Instar examined the relationship between folk song and the environment and led to collaborations with contemporary nature writers Rob Cowen (Common Ground) and Helen Macdonald (H is for Hawk) as part of her curation at Kings Place, London. She has had compositions commissioned by The Radio Ballads (BBC Radio 2), The Elizabethan Session, Sweet Liberties (Parliament) and Shake The Chains.

Nancy performs with Melrose Quartet, Martin Simpson and Andy Cutting and as part of Peter Bellamy’s folk opera The Transports. Nancy was taught by famed Northumbrian shepherd-fiddler Will Taylor and has taught and lectured internationally. Kerr is a Principal Lecturer in Folk Music at Leeds Conservatoire.  She is also a qualified Music Therapist.