We encourage attendees who are at all levels of musical experience to drive the weekend by suggesting or leading workshops and by gathering for impromptu music sessions and conversations.  We also hire staff to share their expertise in specific traditional folk genres and the contexts of those song traditions, and to mingle and mentor.

Jake Blount
Jake Blount is an award-winning banjoist, fiddler, singer and scholar based in Washington, DC. He is half of the internationally touring duo Tui and a 2020 Strathmore Artist in Residence. He has studied with modern masters of old-time music, including Bruce Molsky, Judy Hyman (of the Horse Flies), and Rhiannon Giddens and Hubby Jenkins (of the GRAMMY-winning Carolina Chocolate Drops). Although he is proficient in multiple old-time styles, he specializes in the music of Black and Native American communities in the southeastern United States, and in the regional style of Ithaca, New York. In 2016, Blount became the first Black person to make the finals at the prestigious Appalachian String Band Music Festival (better known as Clifftop), and the first to win in the traditional band category. In the following year, he received his B.A. in Ethnomusicology from Hamilton College and released his debut EP, “Reparations,” with award-winning fiddler Tatiana Hargreaves. He toured Scandinavia and released a CD with the Moose Whisperers in 2018. He opened several shows for MacArthur “Genius Grant” recipient Rhiannon Giddens the same year, and joined Libby Weitnauer to form the duo Tui while on a tour of Australia and New Zealand. In 2019, Tui released their debut album, Pretty Little Mister, and Blount claimed first place in the banjo contest at Clifftop with three tunes from Black banjoists. He is now working toward his first full-length solo album.

Ann Downey
Ann Downey sings and plays upright bass, clawhammer banjo, and guitar in a wide range of styles, ranging from old-timey Appalachian to jazz, and most of what happens in between. As a vocalist she's drawn to good old songs, (often the wackier the better), yodeling, and coming up with close and crunchy harmonies. Originally from the southwestern U.S. she now lives in Ottawa, Ontario and has performed in Europe, Canada and the U.S. She's sung, played and recorded with Finest Kind, Sneezy Waters, The Old Sod Band, Pat Moore and the Vinyl Frontier, and the Toasted Westerns, as well as on studio projects with other fine musicians. These days Ann can be found playing bass and singing with Sneezy Waters and His Very Fine Band, Shirt-Tearing Boys, Diminished Responsibility Swing Combo, Saloon Dion, jamming in people's kitchens, and as an on-call harmonizing bassist.. She has taught yodeling and harmony vocals at various camps and workshops including Augusta Musical Heritage, and teaches clawhammer banjo at Alcorn Music Studios in Ottawa. 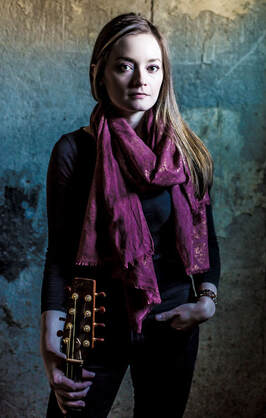 Lindsay Straw
Traditional ballads have been a source of inspiration for guitarist, singer and Irish bouzouki player Lindsay Straw since her childhood in Montana. But she truly grew into the art when she became immersed in Boston's Irish and folk music scenes. There she began to tie together the threads of the traditions she was most passionate about: English, Scottish, Irish and American songcraft. While in college, she founded a young Celtic trad band, The Ivy Leaf, which she draws from to fill out the music on her new second album, The Fairest Flower of Womankind. In addition to her own sensitive, agile accompaniment on guitar and bouzouki, Straw is joined by members of The Ivy Leaf, Daniel Accardi (fiddle), Armand Aromin (fiddle), and Benedict Gagliardi (concertina, harmonica), plus renowned Maine guitarist Owen Marshall (The Press Gang). Throughout, Straw’s tender vocals and careful arrangements draw out the inner depths of these old songs, telling tales of women from beyond the ages. A ballad needs commitment to be told, a belief in the importance of its story. Straw proves that these stories ring with inspiration even today.